Dear friends, the surreal mythical saga Kärgeräs by the Grandiose Magus Jiří "BigBoss" Valter is back! This time, in a literary incarnation entitled "Kärgeräs: Ztracený národ". Alongside the book comes also a CD re-issue of both albums of the BigBoss's project Equirhodont. All that in a single collection! Order now on MetalGate e-shop! 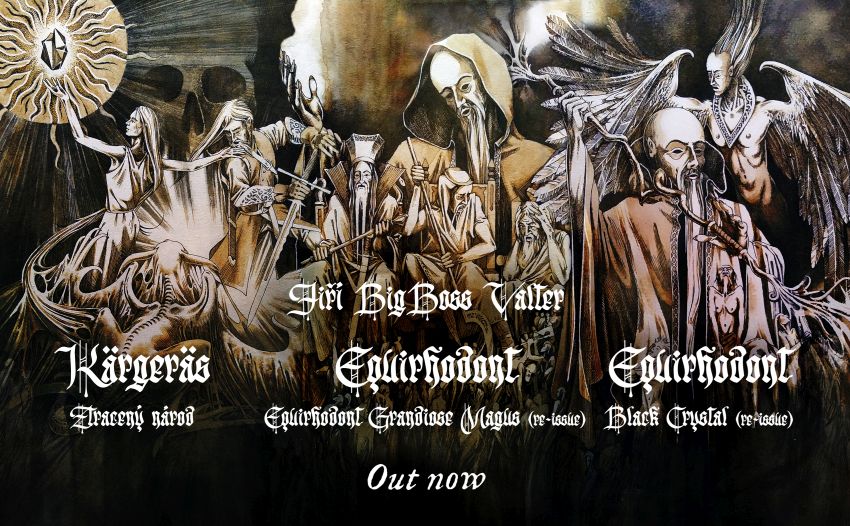 Kärgeräs is back! In his new book, Jiří BigBoss Valter expands upon the legendary Root album

Kärgeräs from 1996 is no doubt one of the most impressive albums by the legend of Czech metal Root. Its conceptual narrative now returns after 25 years, though this time not on a musical medium, but on paper. The book Kärgeräs: Ztracený národ by Jiří BigBoss Valter is out!

The piece is divided into three parts. Its core is the eponymous tale of 13 chapters, wherein the author further elaborates the story of the aforementioned full-length. The second part is entitled Legenda Nizostratio and though it uses the Kärgeräs lore, it is a standalone tale. The final part is comprised of lyrics (both in Czech and in English) from the booklets of the albums Equirhodont Grandiose Magus and Black Crystal by the Equirhodont project that also belongs to the Kärgeräs universe.

In addition, both albums are re-issued for this occasion and included with the book itself in a slipcase, which makes this release a beautiful collector’s item. All three furthermore have a brand-new unified artwork by Marek Pišl, whose artistic talent you can find for example on frontcovers of albums by InnerSpere or Self-Hatred. Marek is also an active musician, playing pipe organs in the doom metal project Quercus.

Kärgeräs: Ztracený národ is yet another unusual literature release of this year by the Prague-based label MetalGate Records. For just several days prior, MetalGate published the culinary opus of the iconic Czech musician and hedonist Tom Necrocock entitled Necro Cook: The Extraordinary Cookbook of Tom Necrocock & Houbová Marie. Should you then wish to add to your library two indeed original tomes that sprung from the Czech metal scene, but can also appeal to wider public, now is your time.

Finally, it is apt to note that Kärgeräs: Ztracený národ along with the Equirhodont re-issues is a sequel to the anniversary boxset Pentagrammaton, which contains all BigBoss’s solo albums. Containing six CDs and 64 pages booklet, this collection came out this February to commemorate the 70th birthday of Jiří Valter. With these two releases, MetalGate has thus covered all of BigBoss’s musical career outside his main band Root.