Dear friends, as the Walpurgis Night is upon us, it is only apt to delve into the history of one of the most profound black metal acts, the ROTTING CHRIST of Hellas, vis-á-vis their official biography Non Serviam: The Story Of Rotting Christ, the Czech translation of which is released today in two editions! 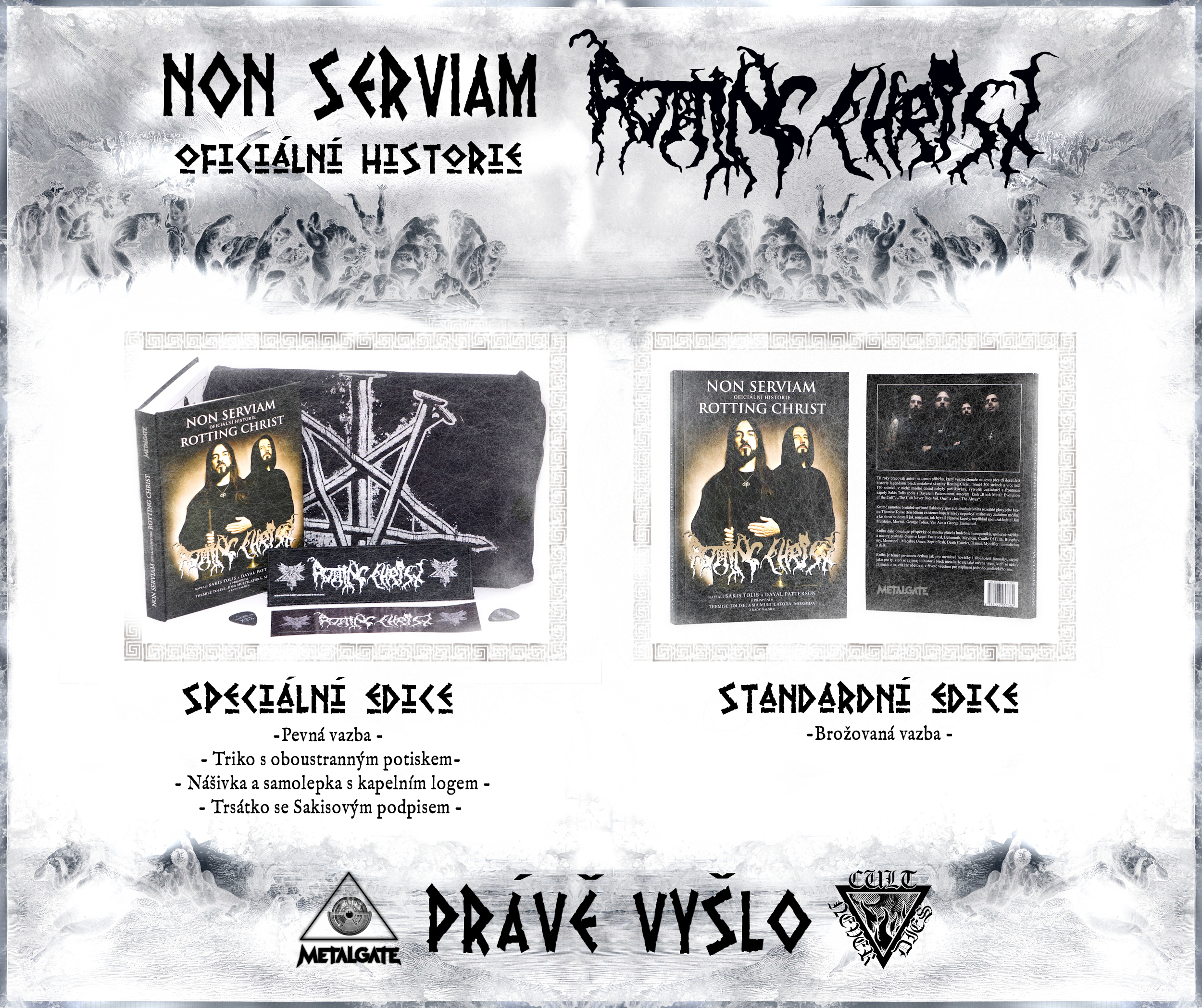 Dear friends, the moment is here! April 30 has always been a magical date, which is why we chose this particular time to publish the Czech translation of the first official biography of the Hellenic black metal legend ROTTING CHRIST. Please join us in welcoming Non Serviam!

As you might recall, is our previous press release, we covered primarily the genesis of this enterprise, whereupon this one focuses on the book as such.

First and foremost, it is apt to note that Dayal Patterson, the main author, conveyed the text in an attractive and “user-friendly” manner, as the bulk of the content takes the form of recollection and testimonials of artists connected with ROTTING CHRIST to various degrees. This interview format is straightforward enough to transport you in time and space to the wild 80s and wilder still suburbs of Athens to witness a story of several teenagers in search for their own path of self-expression and self-fulfillment, which is ultimately found within the extreme music scene, also still nascent and equally rampant as the Tolis brothers and their peers. Utterly enthralled by this musical undercurrent, the group sets out on an adventurous path, from seedy neighborhoods frequented by outlaws and riot police squads to the wider world. And in a time, when their creed is to play as extremely as possible, they are yet to realize that music will become their destiny for the next three decades; that it will become their livelihood; that from a simplistic grindcore they will develop a unique style of sophisticated extreme metal; that they will become one of the most profound black metal acts and the foremost Greek metal band of all times.

All that comes from those directly involved, that being of course the ROTTING CHRIST leader Sakis Tolis and his younger brother Themis, as well as other members of the band line-up, both past and current, such as Jim Mutilator, Morbid or George Emmanuel. Other than that, Dayal Patterson also approached musicians from other extreme metal acts (e.g. Mayhem, Moonspell, Septicflesh, Behemoth or Cradle of Filth) to give their recollections and opinions on ROTTING CHRIST and their albums. Patterson himself enters the story only minimally to introduce the context and framework and subsequently give the floor to the main actors themselves. Such an approach gives the text an excellent flow and readability, so it is entirely possible to devour it in one sitting

The whole text is of course accompanied by rich photographic material that documents the atmosphere of the time and of the various stages of the band history. These are often rare images, published for the first time.

As it is a Czech translation, this version is obviously intended for the local market, though if you would like the English original, please visit its publisher Cult Never Dies, wherein you can also choose between a standard paperback edition and a special hardcover one with bonus goodies (see link below).